Because the sons were out with their cousins for a night of karaoke-singing at BTC, Jerry and I were free to go around wherever we pleased. We decided to splurge a bit during dinner and went to check out David's Kitchen, which incidentally just opened a month ago.

There were a lot of seemingly mouth-watering items on their menu that it would take one a while to choose. We were either hungry or we found the menu encased in acrylic quite heavy to hold that we quickly zeroed in on one of their specialties, the salpicao for Jerry and salmon with arugula for me. 
Meanwhile, here's a transcript of text messages between me and Ma (my messages in green)... Er... ok... That's my Pa's brand of humor. Of course I wasn't talking about David's Salon but the newly opened resto, David's Kitchen, at IT Park.

At Pancake House Before The Cousins' Night Out 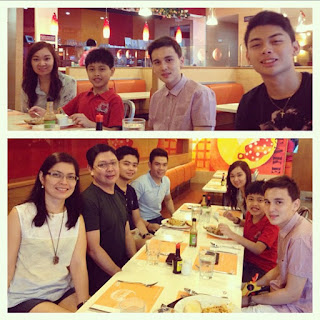 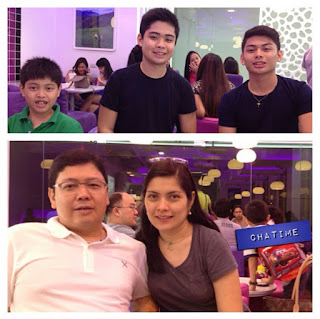 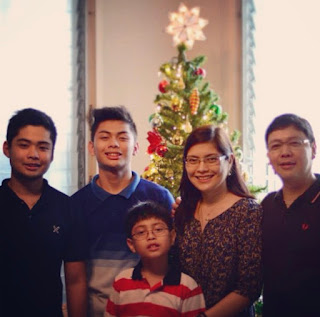 And the Gifts Keep Coming 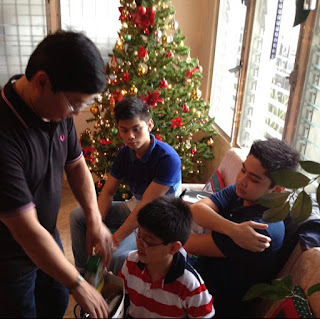 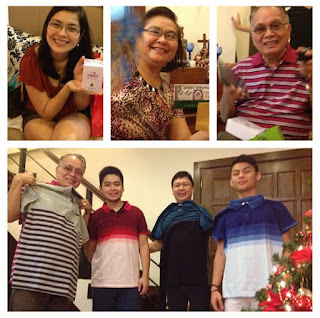 To avoid the rush, we would stock up on gifts for December in September or even as early as middle of the year. For 2012, on a trip to Hong Kong and Macau last April, we bought really cool stuff for a fraction of what these would have cost us had we bought them locally.

Then back in town during weekend jaunts to the mall, I would pick up things here and there that are on sale. When I read the newspaper, I'm more interested checking out advertisements for sale announcements than what's currently in the news (haha!). I believe I'm not the only one who does this. I guess it's wise to spread the gift-giving expenses over the course of months rather than lump it all in one.

This Christmas, the boys received cash gifts. Like in years past, they are given the option to spend part of it and save the rest of it. Although they all started investing in stocks via their insurance policies, only the eldest is keen on topping up his account with extra. The other two are probably not too aware yet of future benefits. They are not motivated by the fact that I have committed to match their savings, in effect, doubling it. Oh well... I don't expect them to be in the know of the market just yet or of Tim Syke's advice on the best penny stocks. For now, I will let them be and let them enjoy the blessings they've received.
at December 25, 2012 No comments:

Moscato and Choco Fondue While Waiting for Christmas 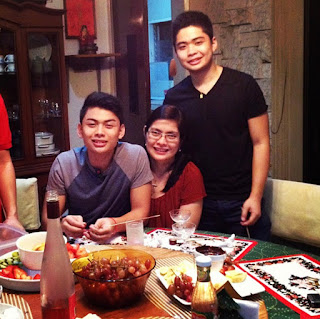 Christmas Greetings From This Wacky Family to Yours 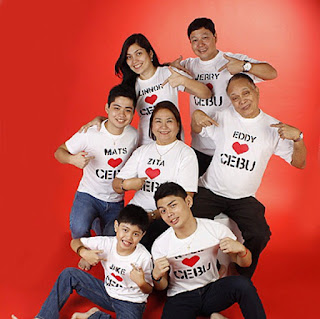 via Instagram http://instagr.am/p/Tkab6tGsYY/
... the remainder of gifts for distribution...

Not that H Belt

Christmas celebrations can start in full swing now that the eldest son, Matt, is back in town. :)

Not Quite The Crow Pose

via Instagram http://instagr.am/p/Tf15NHmsaR/
I'm still struggling with some of the more difficult ashtanga poses even after 2 months of doing yoga 2-3 times a week. But as the instructors say, yoga will happen to us, to me in particular, as long as we keep doing it. We have 97 years to practice. LOL. I already love the overall benefit I've derived from it so far - general well-being, clearer mind, flexibility and weight loss - there's no reason to stop now.

PLUS... I have recently convinced my hubby and elder son to come and join me and middle son. I hope there will be more sessions after their first. I Knew They'd Love It Here

via Instagram http://instagr.am/p/TfpgHkGsUt/
That's just half of the story. The other half is, there are other places they love to be in as well. LOL.

And because the world didn't end on 12/21/12, there's no stopping our Pa and Ma now from celebrating their 46 years of union.

Archbishop-Emeritus of Cebu in the Roman Catholic Church

Trying Out the Studs

via Instagram http://instagr.am/p/TRg4svmsbI/
the tiny nativity set displayed by Ma on our altar

Despite getting home late last night after attending a birthday and bienvenida dinner, the family managed to get up early this morning to attend the first of nine dawn masses. Most of the churches in Cebu (or probably in the whole Philippines) have 4am or 430am masses but the one we attended was at 5am at the Waterfront Hotel.

On our way home, we noticed a lot of people walking. Some were bringing stools they most likely used during the mass because the churches could get really crowded. And the roads were unusually busy today at 6am on a Sunday morning!

At home, our extended family shared sweet ham and "mangga at suman" (mango and sticky rice) for breakfast. Christmas music by the Gunter Kallmann choir played softly in the background while family members chatted and enjoyed the meal... a simple and heartwarming touch to complete our 1st day (of 9 mornings) Christmas tradition.

via Instagram http://instagr.am/p/TPvyfVGsQv/
We are happy to witness the initiation rites of a new member of the Catholic community. Wishing S and D's very handsome hijo a blessed new life in Christ.

D, I thought I was tall but I'm no match to your statuesque figure. Stay fab dear!

I Could Smell Christmas

I am getting excited over the end of the boys' third periodical tests and the start of their Christmas break. After all, it is less than 2 weeks away. And everywhere you go or look reminds you of the festive season - malls, schools, churches, the neighborhood... Party invitations are sent and received left and right... Gift shopping (for friends, loved ones and colleagues) seems endless... Reunions and family gatherings are set... In a couple of days, the novena dawn masses will start...

This excitement needs to be put on hold though just for a wee bit as my sons are still in the middle of their tests. We have been going over their activities and quizzes (my second grader and I) for the period. With the number of subjects multiplied by the number of seatwork and tests, the living room, dining room or bedroom is a veritable paper warzone. Out of exhaustion, sometimes tempers flare up (mostly mine!) that I entertain thoughts of third-party help... *Sigh*.

Last day is on Monday yet. A little more stretch and the celebrations can begin. Jake with his Pa

via Instagram http://instagr.am/p/TM7kcymsXl/
We just came from a wedding at the Archbishop's Palace and bought these photos from the unofficial photographers :) Fortunately, they didn't put our faces on plates, on a rose petal or on calendars this time😜.

via Instagram http://instagr.am/p/TKmUgEGsYD/
Aww... Thanks for your concern, Siri. I'm not on the road, I'm tucked safely in bed...

via Instagram http://instagr.am/p/TDQZ7kmsQe/
Who would think he had a quadruple bypass in 2002 and an angioplasty in 2010?

We gratefully praise the Lord for Pa who just celebrated his birthday. He still has most of his hair and looks stylishly hip in his slim denims at age 71.
at December 10, 2012 No comments:

After the Mass (Immaculate Conception)

via Instagram http://instagr.am/p/S69uIfmsZA/
I remember watching with my family the Sound of Music movie in one of the old cinemas in Manila when I was a kid. Because it was a musical with catchy song numbers and it starred kids along with Julie Andrews and Christopher Plummer, it was especially memorable. Plus, it was based on the true story of the singing Von Trapp family who lived before, during and after the war.

Years ago, our Pa and Ma had the chance to see the Von Trapp estates in Salzburg, Austria and Stowe, Vermont on separate occasions. This cemented their "fan" status. Hehe. So when they knew that the 4th generation Von Trapp kids were coming for a Christmas concert in the Philippines, they made sure to watch.

Last December 6, we were at the Waterfront Hotel in Cebu to hear their melodious angelic voices sing popular Christmas songs, songs from the movie and some original pieces. With or without accompaniment, their voices blended perfectly well together it was heaven.

After the concert, we bought their Christmas and a capella cds which Ma promptly made them sign on. And because we were enamored not only with their voices (they were also attractive to look at, by the way), but their interesting life story as well, I also bought their ebook.

Now you know what I'm currently preoccupied with. :) scene from the movie Birthday and Reconnection at Canvas Our nephew's birthday lunch treat was at Canvas Bistro, owned and run by my sis-in-law together with her hubby. Just like any gathering for this big family, it was a merry one as we exchanged stories and updates amid the laughter.

My 81 year old mother-in-law who was there to celebrate with us, probably enjoyed listening to and looking at her brood and her growing grandchildren. BUT, the highlight of her day as well as everyone else's was when my former sis-in-law dropped by and joined our group. It was unplanned but was totally amusing.

And I was a happy witness to a reconnection and healing... it's a special sight to see Mommy smiling like this...