http://ift.tt/1kcjScJ
Looking at him now, we marvel at how he has grown. This 10 year old bundle of energy has never-ending stories to tell and countless questions to ask. The only time he can be in one place seemingly quiet, is when he is glued to the tv or when he is busy with a game on an iPad. Yet, even then, we could hear his soliloquy, sound effects and sporadic outbursts when he reacts to his virtual opponents. He can't be silenced for long periods. He is a motormouth in the car, in the shower (he sings too) or practically anywhere... LOL.


Talking, almost incessantly, is his catharsis, I think.

Not everyone knows the story about Jake, though... In the short clip below, in front of the whole school during the Sinulog mass last January, he talks about the time when he was born... very much unlike most of his peers...


The day I was born 9 years ago, the anticipation of my parents for my birth, turned to worry when I came out weighing only 2 pounds.
2 pounds! That is just like how a liter of your favorite milk or soda weighs.
I was all skin and bones.
I looked very frail and thin that both Pa and Ma feared I might not make it.
Not make it? In other words, die young?  What a scary thought!
Pa and Ma feared the worst but prayed and hoped for the best.
With child-like faith, they turned to God and prayed to the Sto. Niño for me.
They prayed unceasingly for my survival.
And miracle of miracles, I pulled through!!!
The doctors and nurses of Perpetual Succour Hospital were so glad when I started to feed on water and milk.
I stayed in the NICU for 9 days where Pa and Ma lovingly visited me everyday... for feeding and for bonding.
During that time, I began gaining weight.
Slowly but steadily I grew each day, each week, each month, and each year that passed.
I grew like the rest of my peers.
Now I'm actually bigger and taller than some of my friends!
Our family considers me as a living miracle of God's power.
Thanks be to God and to the Sto. Niño for giving me the gift of life.
The day I was born was the day our lives changed.
Pit Senyor!  Viva Señor Santo Niño! 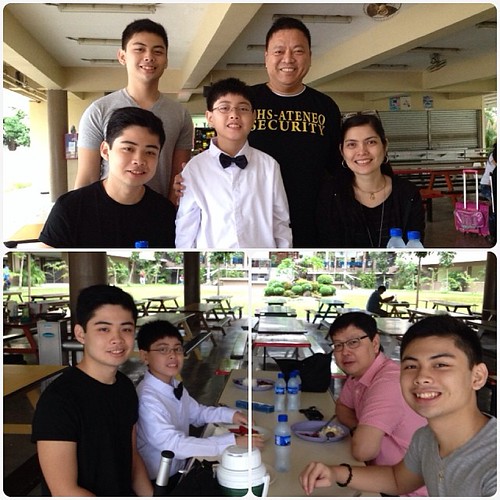 We were all there too during the mass. Here in the photo with the brood was Fr. Manny, the school President.
IFTTT Instagram Linnor